Last Friday I ran a Camp Fire Cooking session for Adhurst Yurts near Petersfield. Alison and Guy who own and manage the company have yurts and a Log cabin in a fantastic woodland setting on the estate. We provide the Bushcraft sessions to their clients.

First the children had fun making the simple bread mixture of three parts Self Raising Flower to one part milk powder and a pinch of salt. The Stick we use is normally Hazel and we cut a green stem about a meter long with a diameter of 2-3cm.The bark is then scraped off the end that you wish to wrap the bread round and the opposite end is pointed. The scraped end is then heated over the fire until scorched. The mixture is made into stiff dough by adding water the dough is rolled into a long sausage shape and wrapped around the heated end of the stick like a snake. The pointed end of the stick goes into the ground and the club bread is positioned over the coals. We determine the position of the bread over the coals by testing the radiated heat with your hand. If you can hold your hand near the heat for a count of five then the club is close enough. The bread is then slowly cooked over the fire until brown all the way round and hollow sounding.  You can also check that its cooked by holding the bread in one hand and giving the stick a gentle twist if the stick comes loose from the bread the bread is cooked. 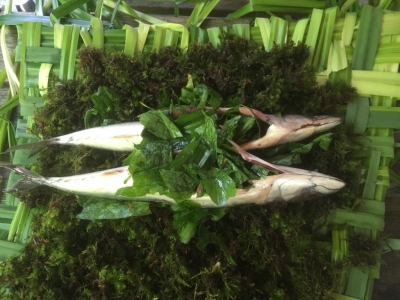 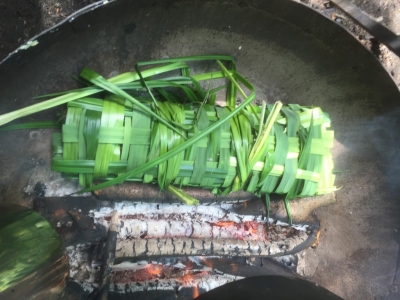 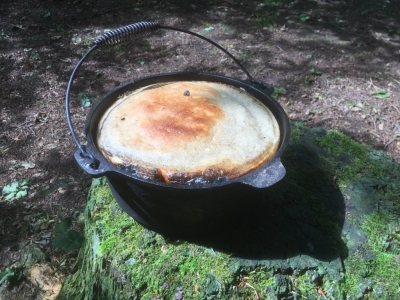 Others in the party were busy making and kneading the bread to go into the Dutch oven.  Finally the Guys were using their new found knife skills to prepare the  Corylus avellana (Hazel) frames on which we cooked the Trout.  The frames are made by splitting a green Hazel stem down its length for about 60cm or twice the length of the Trout. The Trout is then ponassed and opened out to give a flat surface for the heat from the fire to work on so that it can be cooked from both sides. The fish is held open by passing two or three green Hazel skewers through it. The fish and skewers are clamped between the split Hazel that is tied at the end to hold it tight. The steamed fish should take half an hour to cook the Ponassed fish a little less and the bread in the Dutch oven approximately an hour. Passing a skewer into it checks the bread in the oven and if it comes out clean you know it’s cooked. As the oven is suspended over the fire you will need to place some coals on top of the lid to brown the top of the loaf this is why the lids to the Dutch ovens have a raised lip on them to hold the coals and not let them fall off the top.